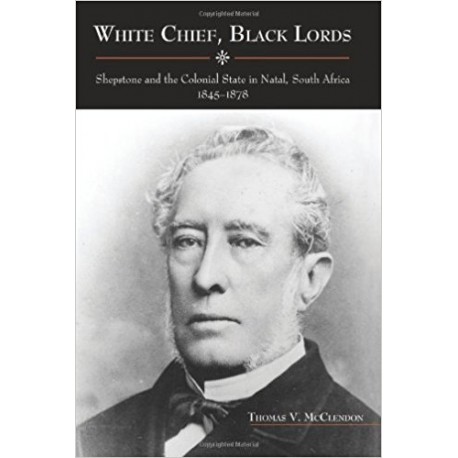 White Chief, Black Lords explores the tensions and contradictions between the British colonial civilizing mission and the practice of indirect rule.

In this book, Thomas McClendon analyzes this deep contradiction by looking at several crises and key turning points in the early decades of colonial rule in the British colony of Natal, later part of South Africa. He focuses a keen eye on the tenure of Theophilus Shepstone as that colony's Secretary for Native affairs, examining his interactions with subject African communities.

In a series of case studies, including high drama over rebellions by African "chiefs" and their followers and intense debates over the control of witchcraft, White Chief, Black Lords shows that these colonial imperatives led to a self-defeating conundrum.

In the process of attempting to rule through African leaders and norms yet to discipline and transform African subjects, the colonial state inevitably was itself transformed and became, in part, an African state.

McClendon concludes by spotlighting the continuing importance of these unresolved contradictions in post-apartheid South Africa.

Thomas McClendon is Professor of History at Southwestern University in Georgetown, Texas.